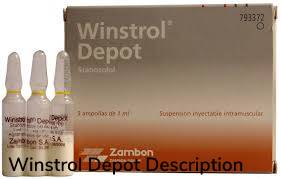 (injectable stanozolol)
Stanozolol is an oral anabolic steroid developed by Winthrop Laboratories in the 1950s under the popular trade name Winstrol. Following the release of the oral form, which was and still is available in various doses, injectable stanozolol was released. The injectable form of stanozolol is better known as Winstrol Depot. From a therapeutic point of view, Winstrol Depot has been very successful, but the original oral form is more common in medicine. Both oral Winstrol and Winstrol Depot are commonly used in performance enhancing settings. The preference for these two systems is rarely related to efficacy, but much more often to rumour.
Regardless of the form (oral or injectable) Winstrol Depot remains one of the most popular anabolic steroids of all time. It is a steroid used in most sports you can think of and is popular with many bodybuilders as a way of preparing for competitions. “Winstrol Depot also has many benefits in the medical world, including treating osteoporosis, fighting diseases that cause muscle loss, helping burn victims and those who have been exposed to long-term corticosteroids. Winstrol Depot, surprisingly to some, has even been used as a weight loss treatment in some cases of severe hormonal imbalance. In the treatment of broken bones and even in the treatment of stunted growth in children, all have successfully used Winstrol Depot.

“Winstrol Depot is an injectable grade dihydrotestosterone (DHT) anabolic androgenic steroid. Winstrol Depot exists by introducing a pyrazole group into the DHT hormone, replacing the keto group with an A-ring, making it a heterocyclic steroid. A methyl group is then added to the hormone to prevent it from entering the body. This structural change classifies Winstrol Depot as a C17-alpha-alkylated (C17-aa) anabolic steroid. The hormone is then suspended in water; water is used as a carrier so that it can be injected into the body.
Important note: Winstrol Depot can be suspended in oil, but water-based solutions are most commonly used.

Winstrol Depot is a highly anabolic hormone with an anabolic rating of 320. However, due to structural changes in the hormone DHT, its androgenicity is quite low, with an androgenic rating of 20. It has androgenic properties, but these are mild in most cases. Users, although it is slightly stronger in females than in males.
“Winstrol Depot has many positive properties; perhaps one of the most beneficial is its ability to reduce sex hormone-binding globulin (SHBG) levels. There are several anabolic steroids that can do this, but not many that do it at the rate of stanozolol. Reducing SHBG increases free testosterone. Free testosterone is our active usable testosterone, and that which is not free binds primarily to SHBG. A reduction in SHBG results in an increase in active testosterone. Reducing SHBG also makes the use of other steroid hormones more effective. Data shows that Winstrol Depot can reduce a man’s HGH levels by 50%.
Winstrol Depot has many properties other than reducing HGH. This hormone effectively increases protein synthesis, nitrogen retention and red blood cell count, and reduces the amount of glucocorticoids (stress hormone) in the body.
“The structure of Winstrol Depot is identical to oral Winstrol; both are composed of the same hormone stanozolol. There is no difference between the two steroids, except for the method of delivery. In any case, the results will be the same. Some believe that the oral form may slightly reduce HSPH levels compared to the depot form, but the data suggest that in most cases the difference is negligible. Some users also report that Winstrol Depot is more effective milligram for milligram, but the data does not support this, which is not surprising as it is the same anabolic steroid in both forms.
Important note: Winstrol Depot is a C17-aa anabolic steroid, just like its oral equivalent. Both forms are equally toxic to the liver.
Important note: Although this hormone is the same in oral and injectable form, this is not the case for all steroids, which may be available in both forms. The best examples of this are Primobolan and Primobolan Depo.

Winstrol Depot has never been what you could call a bulking steroid. Rarely will you find a bodybuilder using this hormone in the off-season. Winstrol Depot is best used for athletic purposes and on cut-off courses. Theoretically, it can be used during the build-up phase to take advantage of the reduction in HGH, but given the high toxicity of this steroid, this would be a very irresponsible use.
For the athlete, it is one of the best steroids for increasing strength, more so for the athlete as it is not known to increase mass. If you are looking for mass, this is not the right steroid. Winstrol Depot helps the athlete with speed and strength. No, you will not gain athletic talent with it, and you will have to keep working hard. Many people make the mistake of taking steroids like Winstrol Depot, and you will do better with less. But the truth is that you need to take a steroid like Winstrol Depot so that you can do what you do right, but a little better.
Athletes and bodybuilders should find that recovery improves and muscle strength increases. Bodybuilders also benefit from the steroid’s strength benefits during the dry cycle, as strength is often lost during this phase. Winstrol Depot can help you maintain more strength during a period of low caloric intake.
Myth: Athletes should not use Winstrol Depot because it weakens tendons.
Truth: Data has shown that Winstrol Depot strengthens tendons and is good for our bones too. If this were not the case, it would not be used to treat osteoporosis.
Myth: Winstrol Depot causes joint pain.

Truth: There is nothing structural in Winstrol that can cause joint pain. Most who take it use it during weight loss, which often causes joint pain. Some also train harder when using this steroid (increased endurance and recovery) (don’t forget increased strength). All of this can lead to joint pain.
The effects of Winstrol Depot, appreciated by many athletes, reach their peak during cutting cycles, especially in extreme conditions like competitive bodybuilders. This steroid helps to maintain the muscle mass that is often lost during dieting. It cannot be called the best steroid for this purpose, but it has this ability. The effect of Winstrol Depot is really visible in its ability to make the body more toned, vascular and defined. This is not the case when the body is covered with a thick layer of fat. This steroid works best in shrinkage cycles when injected at the end of a plan when a person is already quite thin. It is one of the best steroids on the market for bodybuilding and goal setting.